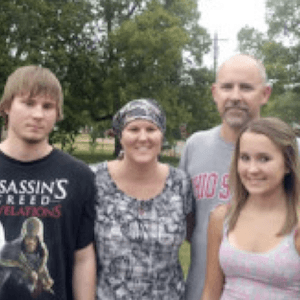 Randy and Pam became married in February of 1992; they started their marriage overseas in Spain, where Randy was in the military. Their son, Jared, was born in Spain in 1994. In 1995, the Payne family was transferred to Maryland; they remained there until Randy’s release from the military in 1998. Pam and Randy, graduates of Fairfield and Princeton high schools respectively, decided to return home to the Cincinnati area to be closer to family. After the birth of their daughter Andrea in 1998, the family moved to a home in the Fairfield area. Randy has worked for Hamilton County as a Network Administrator since release from the military; Pam has worked for Agape Children’s Center in Forest Park. Jared will be starting his senior year of high school this year and plans to pursue college after graduation. Andrea will be in middle school in the upcoming school year.

Following many tests, Pam was diagnosed with Stage IIIc ovarian cancer in May. Things started moving fast; she had surgery including total hysterectomy and tumor reduction surgery. After a few weeks recovery, her doctors started her on multiple chemotherapy drugs. She is at the oncologist twice a week for shots and chemo once a week. Due to her treatment and effects thereof, Pam has been unable to continue to work around children at the daycare. With a reduced income, the family hopes to move forward and get past this, but cannot do so alone.