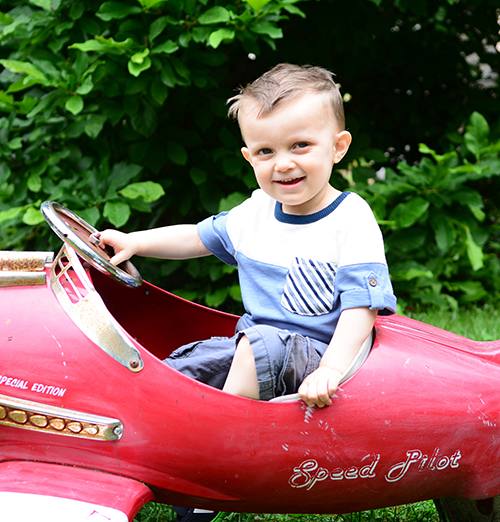 In September 2015, our family was forever changed. Our toddler, Huxley, was diagnosed with a DIPG brain tumor – the same kind of brain cancer that Lauren Hill fought, that is 100% terminal. Because of the aggressive nature of DIPG, and where it resides deep in the brain stem, our son Huxley quickly deteriorated to the point where we were forced to put our jobs on hold, send our other two children to friends’ and family’s houses, and spend every waking moment in the ICU at Children’s Hospital with him. My husband’s employer was compassionate and worked with him during our son’s illness. I, however, lost my position as a Director of Marketing, which would have been a blow to our household during normal circumstances…and these were anything but normal circumstances.

There is no cure for DIPG. The standard of care is radiation, which our son couldn’t endure because of a severe reaction to the daily anesthesia required to radiate toddlers (many other DIPG children his age have this sensitivity). That meant the doctors had nowhere to turn, so we tried every alternative therapy imaginable in hopes of helping him, or at least alleviating his suffering as much as possible. This was not a time to weigh costs or care if we could afford these things.

Midway through his illness, a friend told our story to Helping Hands. Even though they had already exhausted their funding for the year to help other families, they were kind enough to make it work. They took care of bills that otherwise probably would have gone unpaid, because we simply didn’t care at the time. Helping Hands proactively reached out to us to see how they could help, and they always did so without making us jump through hoops or fill out mountains of paperwork.

Huxley passed away in April 2016, eight months after his diagnosis. Without the generosity of organizations like Helping Hands of Cincinnate, my husband and I wouldn’t have had the luxury of abandoning our daily life to be with him when it mattered most. We are eternally grateful.